This is later than usual, as my day escaped me. Here is Amy from Paper Finch Design! Thank you for sharing with us!

Hi there! I’m Amy, the designer behind PaperFinch Design. I’m also a wife, a southern gal, and a lover of cheese. Mostly the dairy kind, but also the bad-pun kind. I live just north of Atlanta, Georgia on the Chattahoochee River. If any of y’all have ever heard the song, then you’re well aware that down here it gets hotter than a hoochee coochee. And yes, I say y’all. A lot.

I also have two kitties, have an affinity for 80s sitcoms, and a lot (I mean, a LOT) of books.

PaperFinch design started a couple of years ago when I was sitting under a tree and an apple fell on my head, causing me to realize that I just wasn’t doing what I wanted to do in life. Okay, the apple part isn’t exactly true…but the sudden realization that I didn’t want to work as a secretary/waitress/bartender for the rest of my life? That part’s true. So I went back to school (art school, in fact) and learned all about graphic design. I already had two degrees - one in Theater and one in English… I guess you can add school to the list of things that I like to do.

I had been scrapbooking for years, but never thought I could be an (ahem) artist…simply because I can’t draw very well! But I learned a couple of things at art school: One, people in art school are weird. True story. And also, that I can draw better than I thought! And that, with the magic of a computer, you don’t really have to be able to draw perfectly, per se, as long as you know how to manipulate your horrid stick figure drawing into something beautiful and wonderful and fully realized on the computer! And so, ta da, I became a graphic designer!

The road was still a little bumpy, though, and I started out designing mainly vintage-inspired invitations. I still have some of those invites up in my shop (and they still sell!), but I discovered along the way that my true love lies in home décor. In art school, I always got in trouble for too much decoration. Translation, I liked to just make my projects ‘pretty’ and not ‘informative’. Well, blah, blah, blah – now I get to just make ‘pretty’ all I want! My current favorite ‘pretty’ is probably my “Home is Wherever I’m With You” print. I just really love how it turned out…and I love that song! Have y’all heard that song? By Edward Sharpe and the Magnetic Zeroes? It’s fantastic. And also in commercials, so I’m sure you have actually heard it. 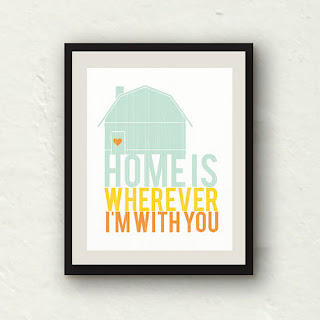 As for my workspace, it’s not very exciting. Since 99.9% of my work is done on the computer, my workspace consists of a desk, a bunch of drawers holding my current inventory, a cat (or two), and, most likely, a day old empty coffee cup. And sticky notes everywhere. 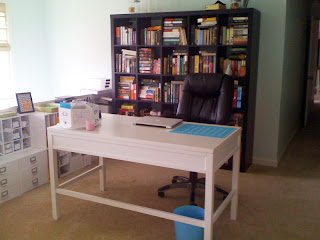 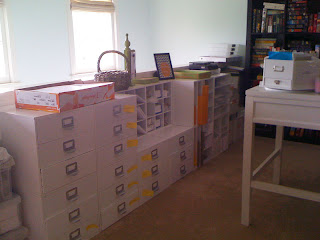 But I don’t spend ALL my time at the computer! No sir! I also like to play tennis (a new hobby of mine), read all those books I mentioned earlier, and dream about decorating my house. Which I don’t ever actually do. ☺ I’m too busy doing laundry.

For all you new crafting entrepreneurs out there, I have a few little tidbits of advice. One, do what you love! That’s the easy one. But after that comes two, three, and four, which are – work, work, work! You’d be amazed at how much work it takes to keep your Etsy shop up and running. You can’t just list your fabulous creations and sit and wait for people to find you. In the past two years I learned all about Liking and Tweeting and Pinning and Following and Stumbling and you get the picture. (Full disclosure: I DID already know about Facebook because, duh.) But, as much as you’d be amazed at how much time it takes to get your shop moving, you’d also be amazed at how great it feels once you do!